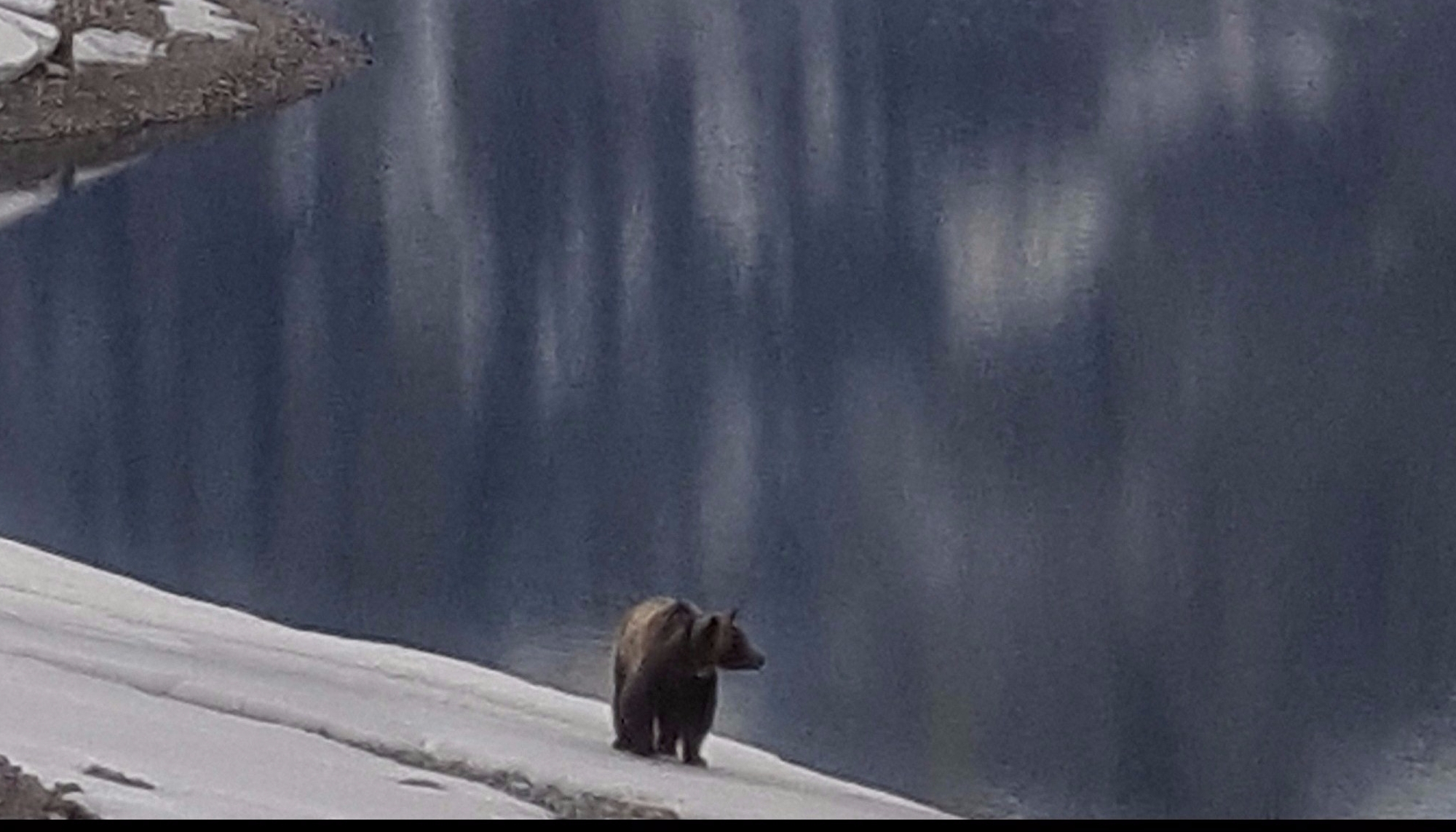 Many years ago when I was in the Navy, my submarine (USS Birmingham, SSN 695) pulled in to port in Yokosuka Japan. Myself and a few buddies decided to take advantage of some time off and got on the train to Tokyo armed with our map of the subway system, limited knowledge of where we were going (except that we hoped to find cheap electronics , booze, and girls) and exactly 0 words of Japanese. We hit the Tokyo train station and try to figure out the subway, which should be easy with our map right? One little problem, our map is in English and the subway maps on the walls are in, you guessed it, Japanese. How rude of them right, having only their language on the maps in their country? We were trying to get to the Roppongi area of Tokyo, and people can tell, from our perplexed expressions trying to reconcile the stupid map in our hands with the one on the wall, that we are lost. Many of them try to help us (and I’m sure thinking “what’s with these stupid American’s and their map only in English?”), but we are butchering the name Roppongi so badly that no one can understand us. Until this one nice lady figures us out and says “me Roppongi, me Roppongi.” And takes off. We follow. Oh, just for reference, I’m 6’2″ about 190 at the time, and I’m by far the runt of the group. Now get a mental image of this:  The lady we are following is <5′ tall and gliding through and blending in to the absolutely packed subway system while myself and buddies try to follow as gently as we can. Which is to say we did not glide or blend in. We basically bashed our way through trying to keep up with our only lifeline to the wonders of Tokyo.   Today, there would be video of that. We did succeed in keeping up and didn’t hear any emergency sirens coming from behind us, so I can only assume there were no serious injuries. I still wonder. And the very nice lady got us to Roppongi. We could have used her 12 hours later  outside a Tokyo train station wondering how to get back to Yokosuka at 3 am. Turned out, you couldn’t and we had a nice sleep on the ground outside said train station.  Remember where we were looking for booze, well we found a lot of it. Actually, that day could make a funny story all in itself (my buddy’s phrase “English is the international language of business” comes to mind).

The events of this weekend brought this story to mind when a group of Japanese tourists tried to help me this weekend, and the language barrier got in the way once again….

Camping season in Canada officially begins on the May long weekend. Not to be confused with Memorial Day, the May long weekend is like in the middle of May. Camping always sounds like this great idea, but generally we limp home early after a night of snow or driving rain claiming “never again!!” only to do it again, each and every year. This year however was perfect. Blue skies, temps in the upper teens and 20s (60-70some for those south of the border). My wife and I camped in Kananaskis, which is in the heart of the Rockies. Hiking, biking, fires, lazing about, and beer were the agenda. I did talk her into letting me sneak out for a quick fish at Kananaskis lakes.

I got there to find the lakes with some open water, but still a lot of ice. Since I had about 1 hour to fish, I went to a nice spot on the upper lake that I could get to quickly. I found a little open bay next to the parking lot and set up shop. Only to find the fish in no mood to cooperate.  But really, who cared? Nice day, fabulous views, and no snow!  After I’d been there about 45 minutes, I notice some Japanese tourists. Well, wasn’t hard to notice them as they were shouting “Kuma, Kuma!!” at me from across the little bay and pointing at the water, or at least I thought. I’d seen a couple of fish rise, and figured they had too and was thinking “man, these people are pretty excited about the fish.” Whatever they wanted me to do, I wasn’t doing and they started pointing and  shouting “Kuma, Kuma” at me again. Maybe they were Japanese fly fisherman and wanted to see me hook up with whatever they were seeing? Then this Norwegian dude shouts to me in Norwegian. Once again, not very helpful I think. Then he says, in perfectly enunciated English ”
There. Is. A. Bear. Coming. Right. At. You.”  Ok, so that I understood.

Remembering all the bear encounter stories I’d heard, I didn’t want to make any sudden moves. I start reeling in and slowly walking toward the parking lot while angling uphill to get a better view. And sure enough, there is a young grizzly about 100 feet away around the corner I was fishing, and totally heading my way. I think “man, that bear spray in the truck would sure be handy about now”. Fortunately, he seems in no hurry and I continue to walk towards the parking lot keeping an eye on him. I get to the top of the hill where the lot is, and have a nice crowd of people around me. I was pretty sure I could out run at least a few of them, so I, like everyone else, start taking pictures as the bear ambles down the shoreline below us. As he gets closer to the very helpful but hard to understand Japanese folks, they blow some big ass air horn at him. Seriously, that thing was major loud. Now the poor bear is trapped between us above him on one side and these horn blowing Japanese folks on the other side. So he rockets off below us, up the hill, then into the woods. I took that as my cue to leave as bear in the woods made me way more nervous than bear where I could see it.  And if I was late my wife would be mad at me. Oh and there was beer back at my campsite calling my name.

So the morals of the story are

I did thank the Japanese tourists. But I don’t know any Japanese, so unclear on how effective I was. I helpfully remembered the word Arigato about 20 minutes after I left, making it about as effective as the bear spray. 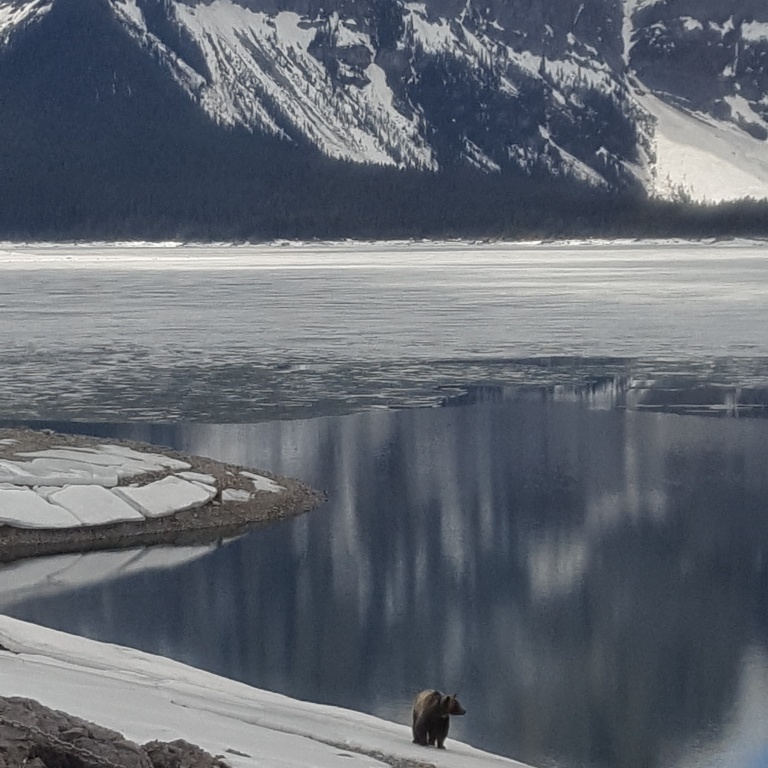 Oh, did I mention bears live in pretty places? 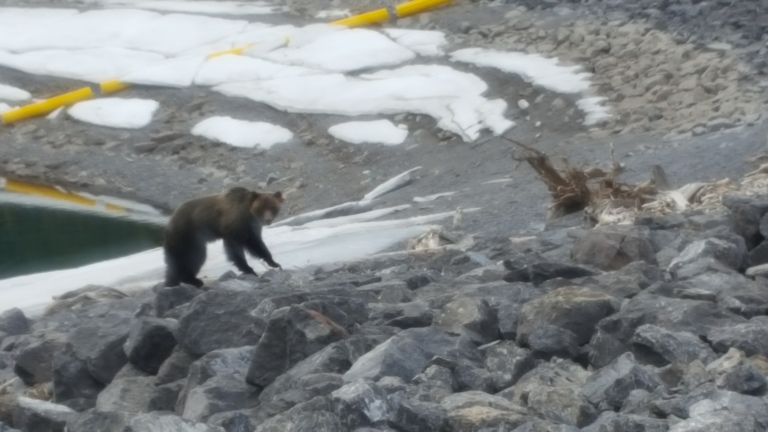 He doesn’t look as menacing in this shot. Looks hungrier though! 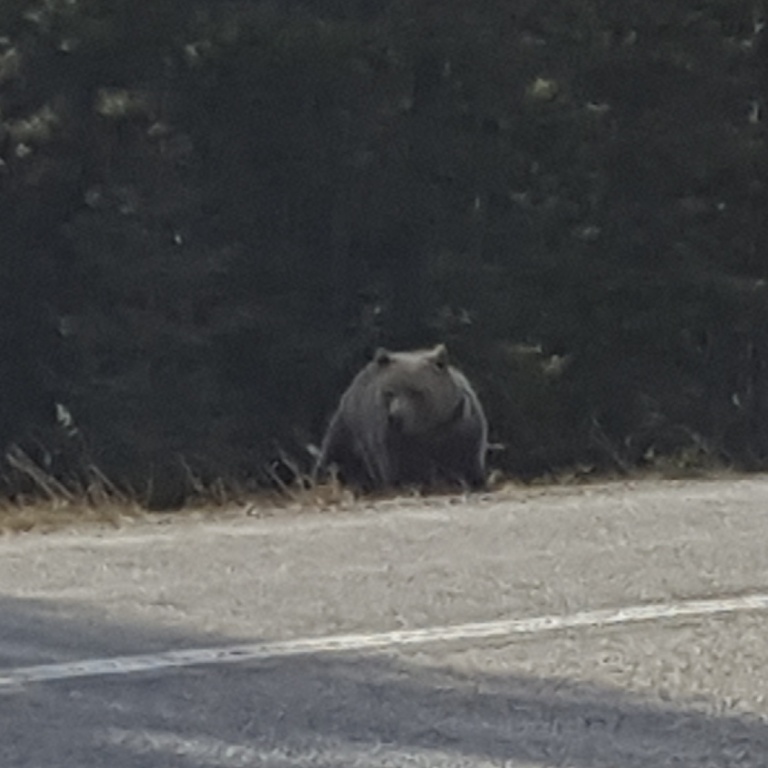 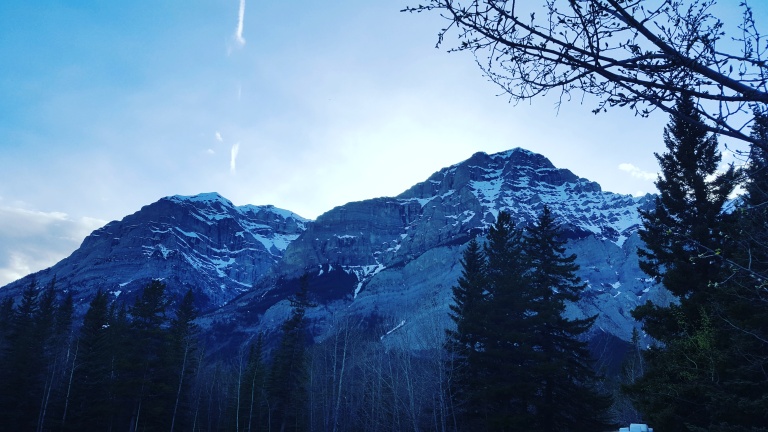 The view from my camper, just because. 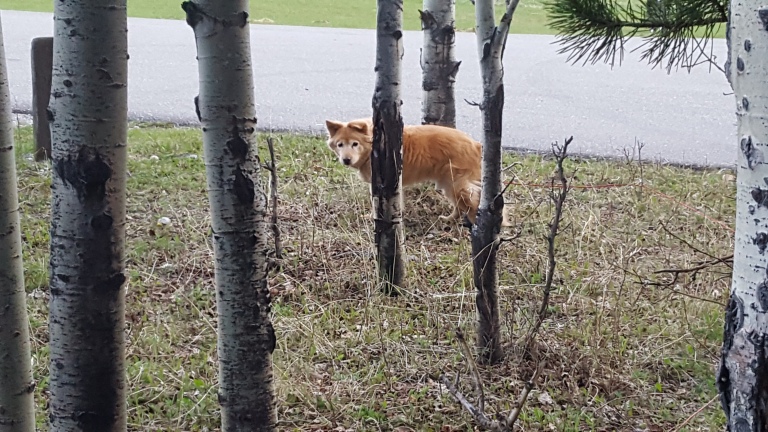 Our dog, guarding our campsite from bears. You can tell how excited he is by the prospect with his “and exactly wtf do you think I’m gonna do with a bear?”