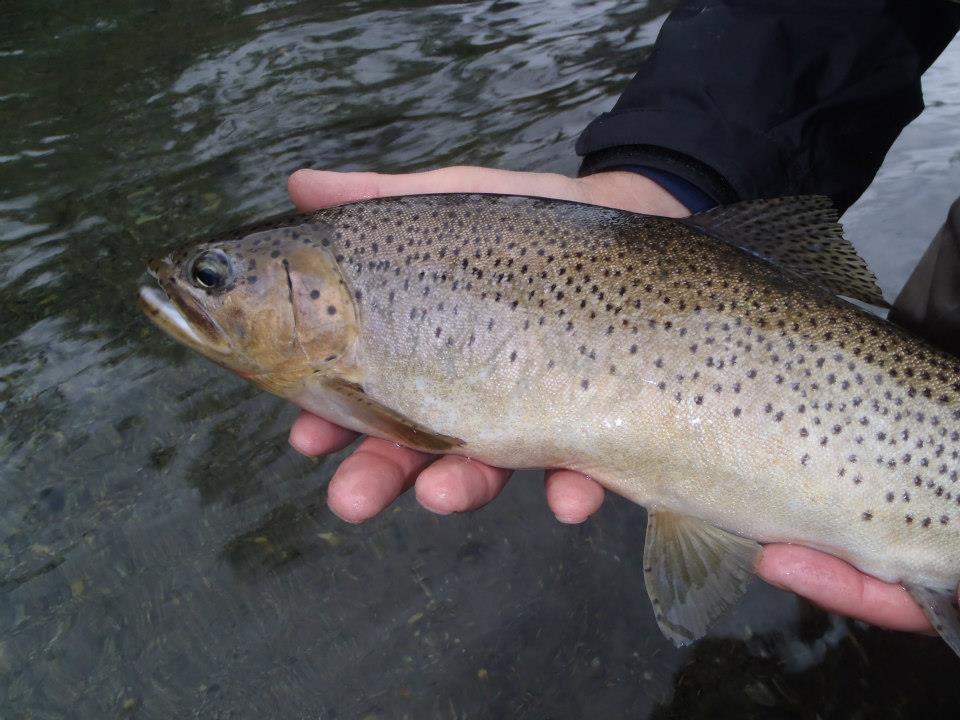 I was going to write about my first three months of practice retirement, but events on the river today have altered my plans.

I have a bit of a reputation among my fishing friends for falling in the river. I’ve earned this reputation by falling in the river often. And not only in the river. Down banks. In forests. On ice with and without skates. Off bicycles. Skiing, both snow and water variety. If it can be fallen off of, I’ve fallen off of it. When I came up with the title for this blog, I didn’t realize just how appropriate it was. I was referencing stumbling as sorta going through life without much direction.  I didn’t realize I had meant it literally. My nickname should be Boom (as in fall down go boom), or maybe Splash. Which brings me to today.

Since we finally got a sunny day here in Southern Alberta, I took off at the crack of 8:30 and headed to the southwest corner of the province to chase some cutthroat trout. It was a perfect morning, not too hot and lots of sunshine. I hit the river about 1030. At around noon, while moving between runs I lost my footing on the basketball sized rocks and started to fall backwards. The fall was fairly routine river fall. I would rank it about a 2 on my 5 point fall scale with 1 being a fall where no water gets into waders and nothing gets broken and  5 being falling down a steep bank and into a deep pool. 5s are not fun. Anyway, I had my fly rod in my right hand and since I’ve broken rods falling in the past (only twice), I knew to not use my right hand to catch myself as I fell, so I used my left. When I went to stand up I saw my left hand in the crystal clear water and thought “that doesn’t look right”. I was pretty sure my left ring finger had been straight when I fell and unless there was a lot of refraction in the water, it was no part of straight now. As I had suspected, removing it from the water did not straighten it out. It was bent in a new and not wonderful direction at the bottom knuckle. So I walked to 10 feet to shore wondering what to do. I was quite literally in the middle of nowhere. Closest town about an hour. And I have to sort of climb out up a steep bank to get to my truck, which didn’t seem likely when I looked at my hand. Then I thought of basketball and football players who dislocated fingers while playing and had them relocated on the sidelines. So…..

I’m slightly fuzzy on the actual details. If you can picture this. My ring finger is laying across my pinky at the knuckle closest to my palm. But I  think maybe that it was dislocated in two directions. So when I sucked in my breath and popped it back in I think “hey, that wasn’t so bad”, until I look and it is now 90 degrees straight up. Holy shitballs. Sucking in another deep breath I again tried the pull and place method a couple of times with 0 success. Not sure what to do next, I spot a big flat rock nearby.  So I put my hand on the rock and pushed the finger with the heel my right hand. Pop! Yes!!!!  It looked like a regular finger again.  I could flex it and everything and it didn’t really hurt that  much. That taken care of, I start upstream in the direction of my truck, a little pissed off that the fishing day was ending way too early. About two steps later I start stumbling forward (see what I did there?) extremely dizzy. I really don’t want to fall again and after about 5 or 6 drunken steps I caught my balance and went down on my knees, super dizzy and weak and very nauseous. Ah, hello shock, it’s been awhile. (My wife tells me  after the fact that this was a vasovagal response, which means I was fainting. But since I’m a grown ass man I’m quite sure she is wrong and I was having shock.) Knowing what is likely to come next, I take off my vest because I thought puking on it would be bad. After a couple of minutes teetering on getting sick or not I decide lying down (yep, still on rocks) might help. It really did. I think I almost went to sleep. After a couple of minutes of that I decide to see if I could walk, and my ambulatory skills, such as they are, were intact.  Now I’m thinking the finger is at some point going to make its presence known, so I start back upstream toward my truck, when I hear “slurp”. I look into the run I had just vacated and see a rising fish. “Ah, what the hell” I think and test the finger. Sore but working.  I walk back and get him on the first cast. Not gonna lie, handling him to take the hook out wasn’t pleasant, but it was manageable.  As it was over the next 5 hours in one of my best fishing days ever! Lots of big willing tout trumps a little pain.

I did learn some things about myself new otherwise.I learned that I can actually not freak out at an ugly (and it was 100% ugly) injury, suck it up and do what needs to be done. I learned that rising fish literally make me lose my mind. I learned that Samsung phones can’t take any damned water (I swear, I had like a freaking drop of water on it. My wallet wasn’t even wet and they were beside each other in my wafer pouch. Samsungs are the worst for water. If you ever need a cell phone water tolerance review, I got ya covered.). I learned that typing a story after a finger tightens up on the ride home isn’t fun.

But what I mostly learned sorta lines up with a quote I read the other day in a book called Welcome to Nightvale: “Every story was of impending doom or death or worse yet, a long life filled with fruitless fear of doom or death.” To me, it means you can’t let fear of the “bad thing” happening, whatever that might be, stop you from living. My corollary would be something like “life doesn’t wait for you, you gotta go get that shit.”  Now I recognize I might take that to an unhealthy extreme at times, but so be it. Because otherwise I would have missed the last hour of fishing yesterday, which was a hour of absolute magic where I got every fish I saw rising, 5 of which were among the biggest cutthroat I ever caught. I’ll remember that far longer than I’ll remember a broken finger. I think.

Note: The picture isn’t of any fish I caught yesterday. I took a picture of one, but now my phone is broke. He was about as big as the one pictured though!